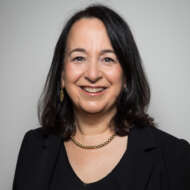 Pamela S. ("Pam") Harper is a globally known keynote and TEDx speaker. She is Founding Partner & CEO of Business Advancement Inc. (BAI), a strategic growth advisory firm in the New York Metro area. Throughout her life, Pam has established a track record of finding the hidden opportunities in every situation and taking bold action to turn them into game-changing success.

For more than 20 years, Pam has used these talents to enable visionary leaders to take advantage of every opportunity along their journey, and advance bold visions in the face of ambiguity. This has led to hundreds of millions of dollars of value in both top and bottom line growth. Clients have included CEOs, boards, and senior executives in entrepreneurial, mid-market and Fortune 500 companies across more than 30 industries.

Pam regularly shares her insights as co-host of the bi-weekly professionally produced audio podcast series Growth Igniters® Radio with Pam Harper and Scott Harper, which launched in 2015. It has been featured in Marketplace, Seeking Alpha, MarketWatch, and other media, and was named a Top Business Podcast in the 2022 PopCon Podcast Awards and as a Top 100 podcast by Thinkers360 Thought Leaders. Guests have included award winning CEOs, emerging thought leaders, and authors of best-selling business books.

Pam has been quoted in and/or featured in prominent business media and major newspapers around the world. Her articles have been featured in prominent sources including Bloomberg Businessweek, Investor’s Business Daily, Pharmaceutical Executive, FEI Daily, Life Science Leader, Chief Executive Magazine and others. Pam is also the author of the critically acclaimed book, Preventing Strategic Gridlock® (Cameo Publications, 2003). The book has been read in universities around the world.

Among Pam’s off-hour interests: Singing and performing in Comic Opera (where she met Scott), becoming a yellow belt in Aiki Jiu-Jitsu, and having a great sense of direction − which has been enormously helpful when traveling to cities in 5 continents. She also enjoys caring for her pets and sharing stories, games, and great meals with family and friends.